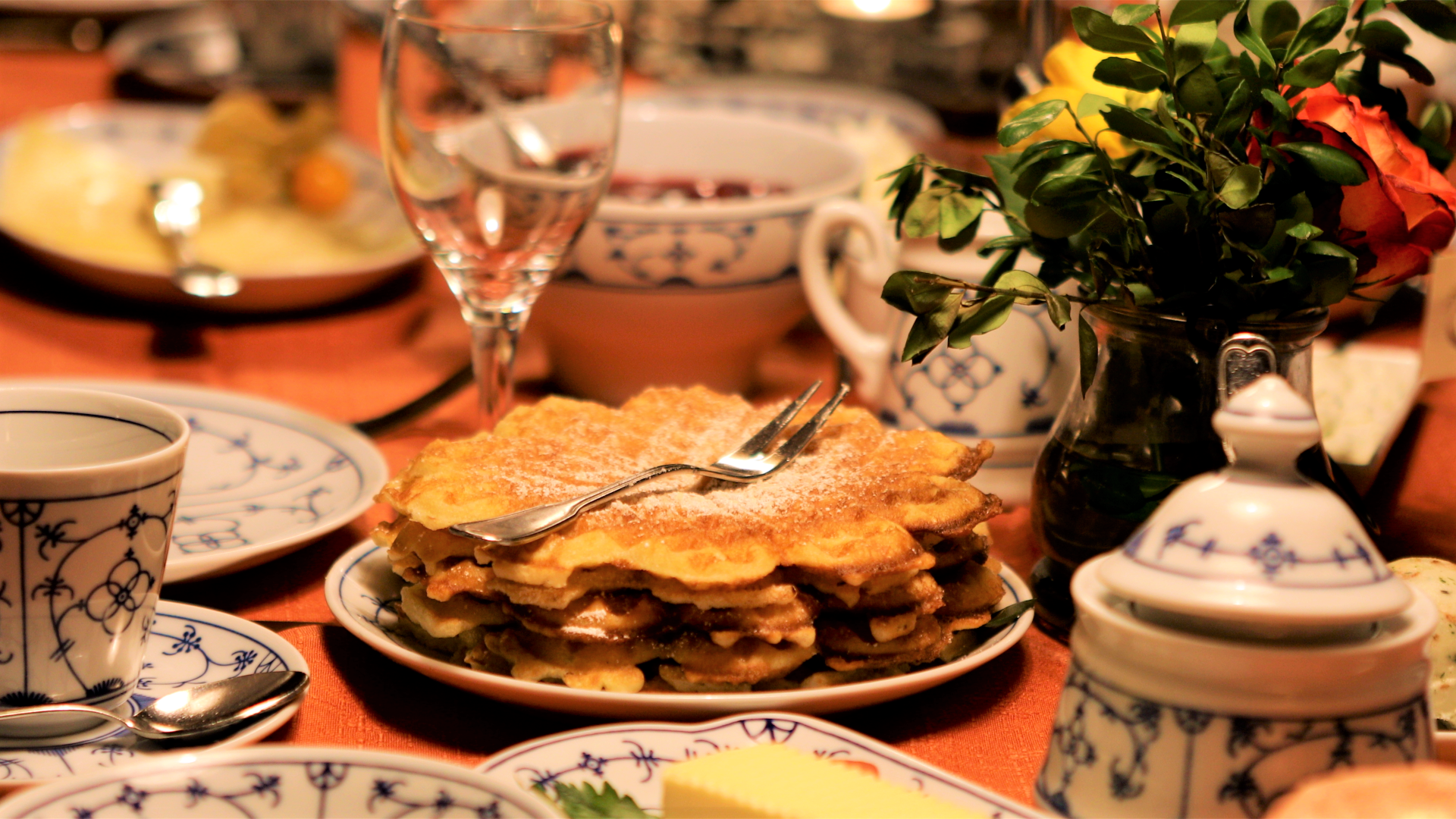 The Bergisch Kaffeetafel still stands for hospitality and a convivial get-together. In the company of others, various types of Bergisch bread, butter, curd cheese, honey, apple and turnip cabbage, rice pudding, cold cuts and waffles with hot cherries and cream are served. Coffee is served, dripping comfortably from a typical pot, the Dröppelmina.

Once a colourful festive feast

As early as the beginning of the 18th century, the Bergische Kaffeetafel was known as a colourful festive feast in the family circle. Since the Bergisches Land was a poor region, everyone invited brought something to eat. In the course of time, a fixed order of dishes developed and each family had its own preferences, so that in some places Rodon cake, Burger pretzels and gussied biscuits or Pannenbrei with bacon can be found on the table.

Course after course a delight

The first course traditionally consists of a slice of "Krentensemel" (currants) spread thickly with butter and cabbage. On top of this you put a finger-thick layer of "stiewen Ries" (stiff rice porridge) with a little cinnamon and sugar. The second course is the Bergische Waffle, which used to be eaten only with applesauce in very poor times and was made of oatmeal. The third course is a slice of Bergisches "Schwattbruat" (black bread) with butter and "Klatschkaes" (curd cheese), with a little apple or turnip cabbage on top if you like. Sometimes farm cheese, home-made sausages and home-smoked ham were also served. A "Klarer" ("Kloarer") or a "Aufgesetzter" ("Opjesadden") concludes the meal. Even if the combination of dishes may seem a little strange to foreigners at first, the Bergische Kaffeetafel quickly becomes very popular with tourists.

Dröppelmina - the centrepiece of the coffee table

The centre of the Bergisch coffee table is the Dröppelmina, a bulbous crane jug made of pewter. It owes its name to the old name "Mina" or "Minna" for a servant. The pear-shaped pot has a crown for serving coffee, two handles and stands firmly on three feet. As pewter is a poor conductor of heat, the pot keeps the coffee warm for a very long time and ensures long coffee enjoyment. As early as the 18th century, the pot, just like coffee and rice a little later, came from Holland, with which the Bergisches Land used to have lively trade relations. In return, the Dutch liked to buy ironware and cloth products from the Wupper or hired themselves out as harvest workers and cattle milkers in the region.

Today, the Dröppelmina is often referred to as the "queen of the coffee table". In its silver-grey pewter dress, it is enthroned almost majestically on the table. To brew coffee in the pot, you measure with its lid. The freshly ground coffee is poured into the lid and the coffee powder is then poured into the belly of the pot and filled with boiling water. The so-called set coffee sometimes likes to clog up the pot if it rises too high and then there is the typical dribbling ("dripping"). But in earlier times, people could not always afford bean coffee, and so grain coffee had to be served at the coffee table.

In earlier times, moreover, pastries made from wheat flour were considered something very special, because one could not afford them every day. In the Bergisches Land, oats and buckwheat were the main crops. Ingredients such as rice and cinnamon, which came from faraway countries, were also precious. And so Rodon cake, currants or Blatz, rice porridge with cinnamon and sugar, or even burger pretzels and glazed biscuits were only served at family celebrations.

Cream, butter and eggs, which were also means of payment, also represented a certain prosperity. Recipes rich in eggs and fat such as Bergische waffles, which are also said to be of Dutch origin, or Rodon cake were therefore also considered purely festive dishes for a long time. Until the middle of the 19th century, Bergische waffles were baked quite elaborately with the help of a so-called tong waffle iron over an open fire, and later in a reversible waffle iron. The cast-iron waffle insert with the shape of a heart was fitted into the hearth of the coal cooker instead of several hearth rings and as soon as the mould was hot enough, the dough was baked. The reversible waffle iron rotated on its own axis and browned the waffle evenly. The mould was always greased with a piece of bacon rind. Old cookers and kitchen utensils can be admired in the LVR open-air museum in Lindlar, in the local history museum in Altenwindeck in the Siegtal or in the farm museum Dr. Isenhardt's Hoff in Eckenhagen, where this photo was taken.

In the Bergisches Land, the Bergische Kaffeetafel is now offered in many restaurants and cafés as a group meal or in variations for individual guests. As in the past, the colourful feast stands for Bergisch hospitality. The restaurants of the Bergisch Gastlichkeit e.V. (Bergisch Hospitality Association) are particularly committed to maintaining the Bergisch tradition and serve local recipes and products from the region in the spirit of the Dröppelmina. In addition, the Bergisch Wanderland has published a brochure with hiking and stopover options for the Bergisch Kaffeetafel. 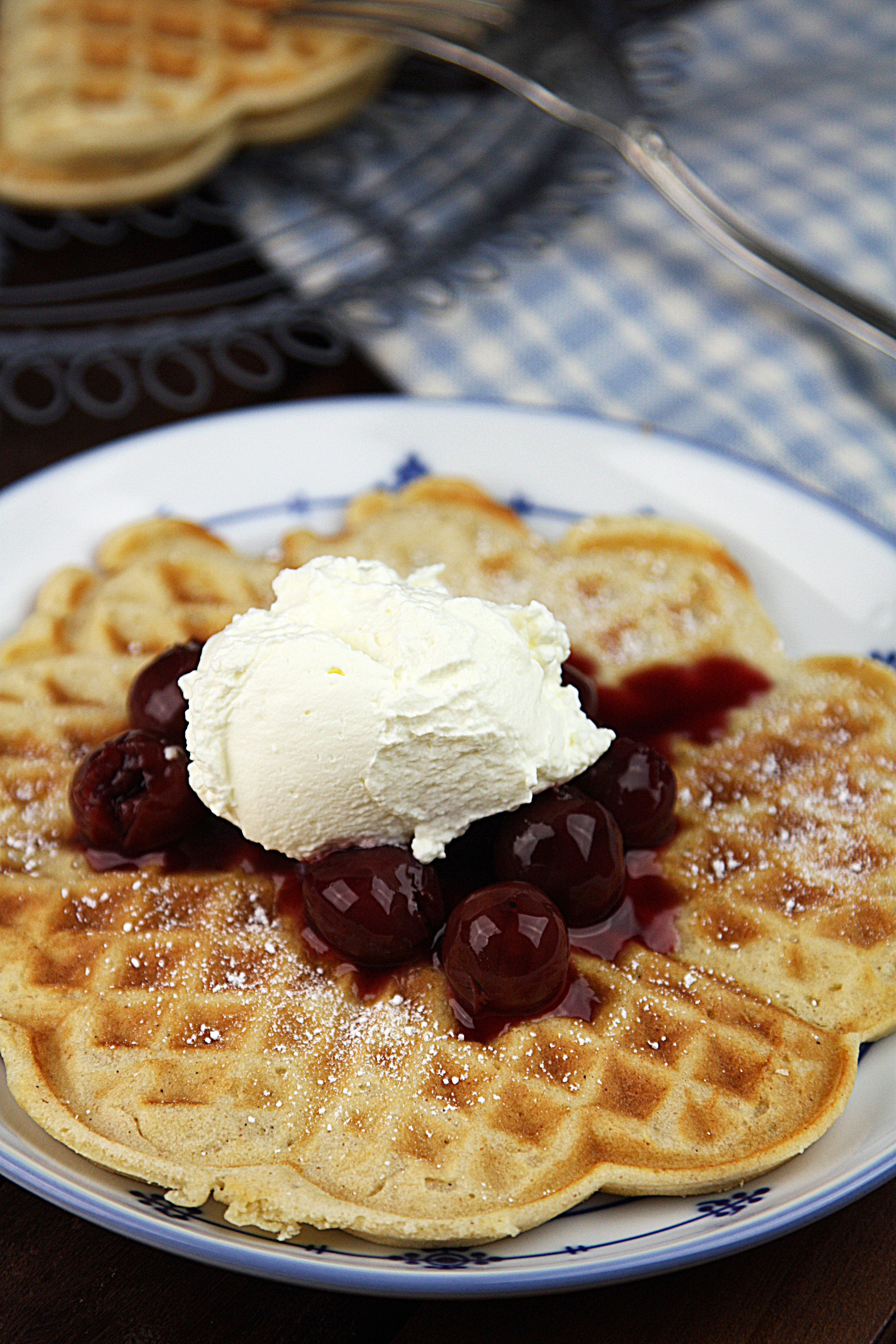