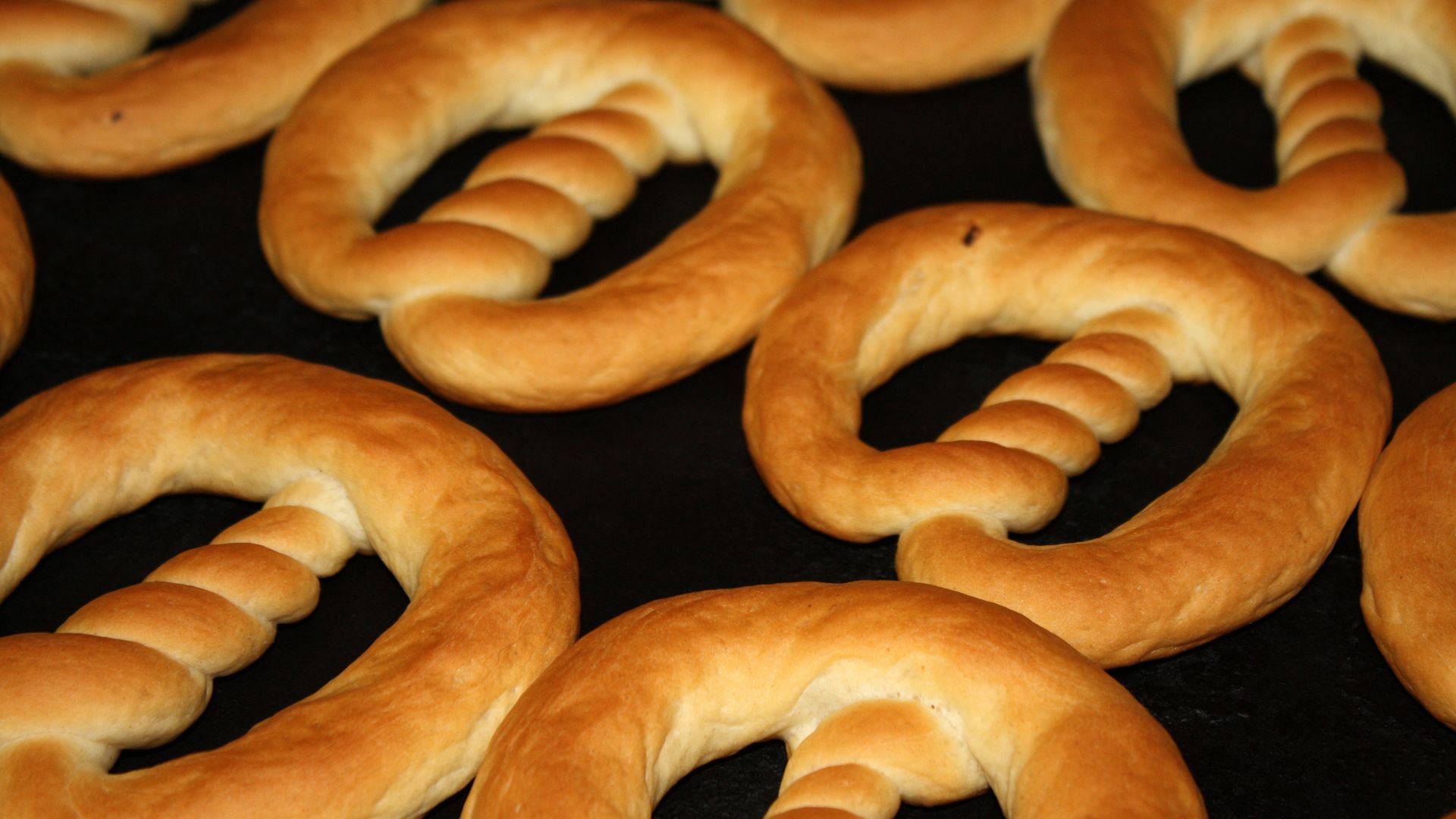 The small town of Burg an der Wupper, a district of Solingen, is still famous today for its artfully looped Burger Brezel. The traditional biscuit, which is more than 200 years old, is now only made by a few artisan bakers and is very special in more ways than one.

Legend of the French soldier

The first Burger pretzel is said to have been baked in the Hösterey bakery in Unterburg around 1795. Legend has it that a wounded French soldier who was a baker brought the recipe with him to the Bergisches Land and showed his professional colleague Johann Peter Hösterey how to make pretzels in gratitude for his good care.

Special shape of the pastry

Visually, the burger pretzel differs from conventional pretzels mainly by its four- to fivefold looped middle strand. To masterfully loop or "spin" the speciality, as the experts say, the skilled baker tosses a long knotted strand of dough into the air, twisting it several times. Just a few hours after baking, the pastry becomes dry and durable like rusks. Only when the pretzels are "dröch" (dry) and rattle in the basket are they right for sale.

Burg at the Wupper - Birthplace of the Burger Pretzel

In Burg at the Wupper you used to see many pretzel men, so-called Kiepenkerle, who often went on sales tours through the Bergisches Land on foot for days with their wicker baskets full of crispy pretzels. In the middle of the 19th century, there were 30 pretzel bakeries in the small town of Burg alone, which could be recognised by a pretzel symbol on the roof of their house. And pretzel bakeries also flourished in the neighbouring towns of Wermelskirchen, Wuppertal and Remscheid.

Snack with tradition and symbolic biscuits

The burger pretzel, made from a low-fat, lightly sweetened yeast dough, was once valued above all as a substitute for bread and as a light meal. The larger pretzel was also popular as a snack for hikers and as a souvenir from the Bergisches Land. On special occasions, such as the New Year, school enrolment or weddings, they were also given as a lucky charm. Alongside Bergische Gusszwiebäcken, Burger pretzels are still an integral part of the Bergischen Kaffeetafel, where the pastry is simply "zoppt" (dunked) into the coffee.

As a result of mechanisation, the small craft businesses that knew how to make pretzels gradually disappeared. And trends towards warm and soft pastries also caused the Burger Brezel and also the Bergische Gusszwieback to almost disappear, so that today only a few bakeries in the Bergisches Städtedreieck still produce the traditional pastries.

Activities around the Burger Pretzel

Slow Food Deutschland e.V. has been involved in the Bergisches Land region since 2010 with its international biodiversity project "Ark of Taste" for the now rare Burger Pretzel. The LVR open-air museum in Lindlar has since been devoting its attention to the classic pastry with a pretzel day to mark the opening of the season in March. In the Unterburg district, the Verschönerungsverein Burg an der Wupper e.V. (Burg on the Wupper Beautification Association) erected a monument to the pretzel bakers of yesteryear as early as 1989 and, together with the Sauerländische Gebirgsverein (Sauerland Mountain Association), initiated a hiking trail around Burg Castle in 2003, following in the footsteps of the Kiepenkerle with pretzel symbol. 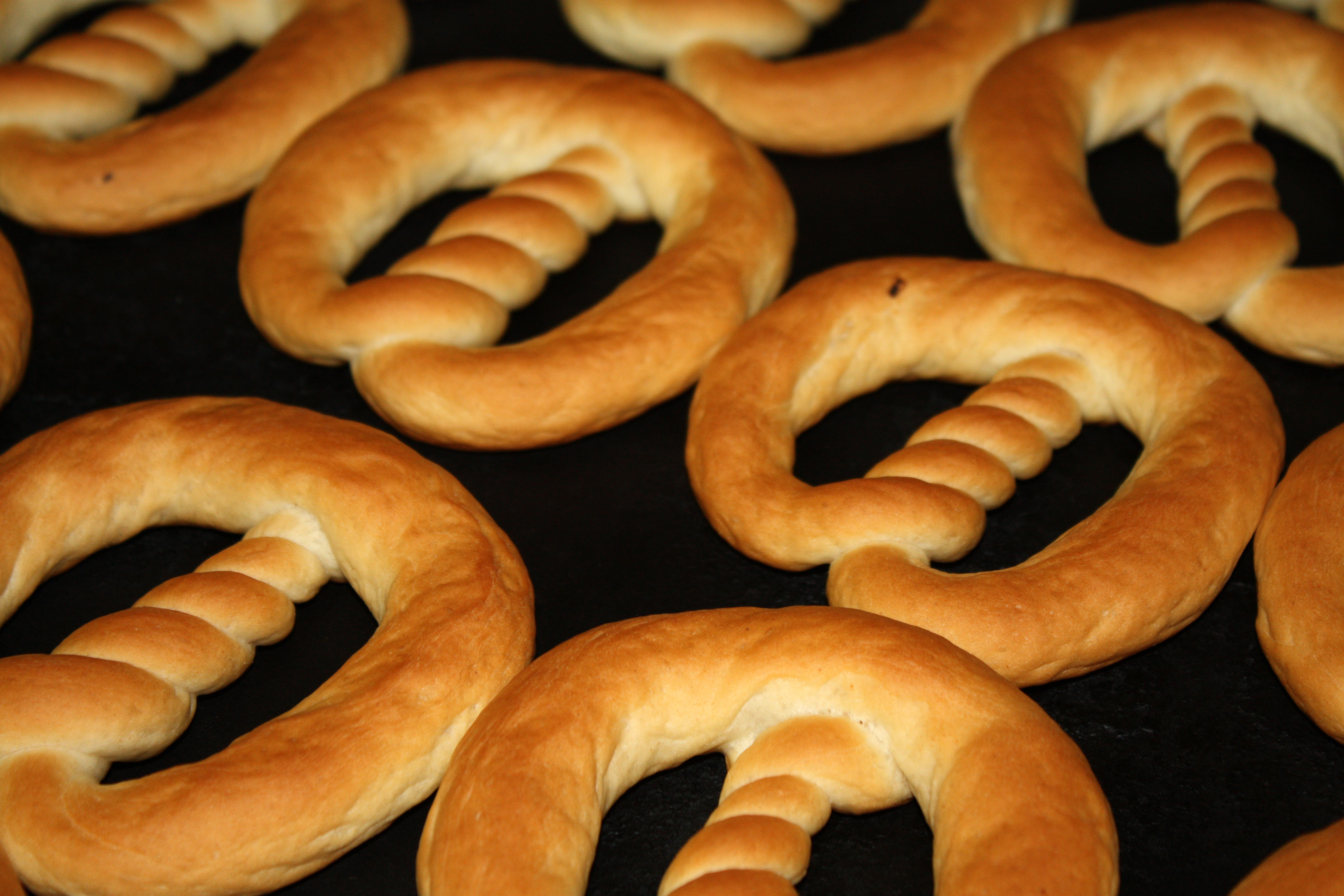 For more than 200 years, Burger pretzels have been one of the culinary specialities of the Bergisches Land region. If you can't buy the pastry or would like to try your hand at twisting pretzels yourself, here is a suitable recipe for home use.

Tip: Burger pretzels are also suitable for delicious layered desserts with yoghurt or cottage cheese and fresh fruit when dipped in a little apple juice, coffee or liqueur.