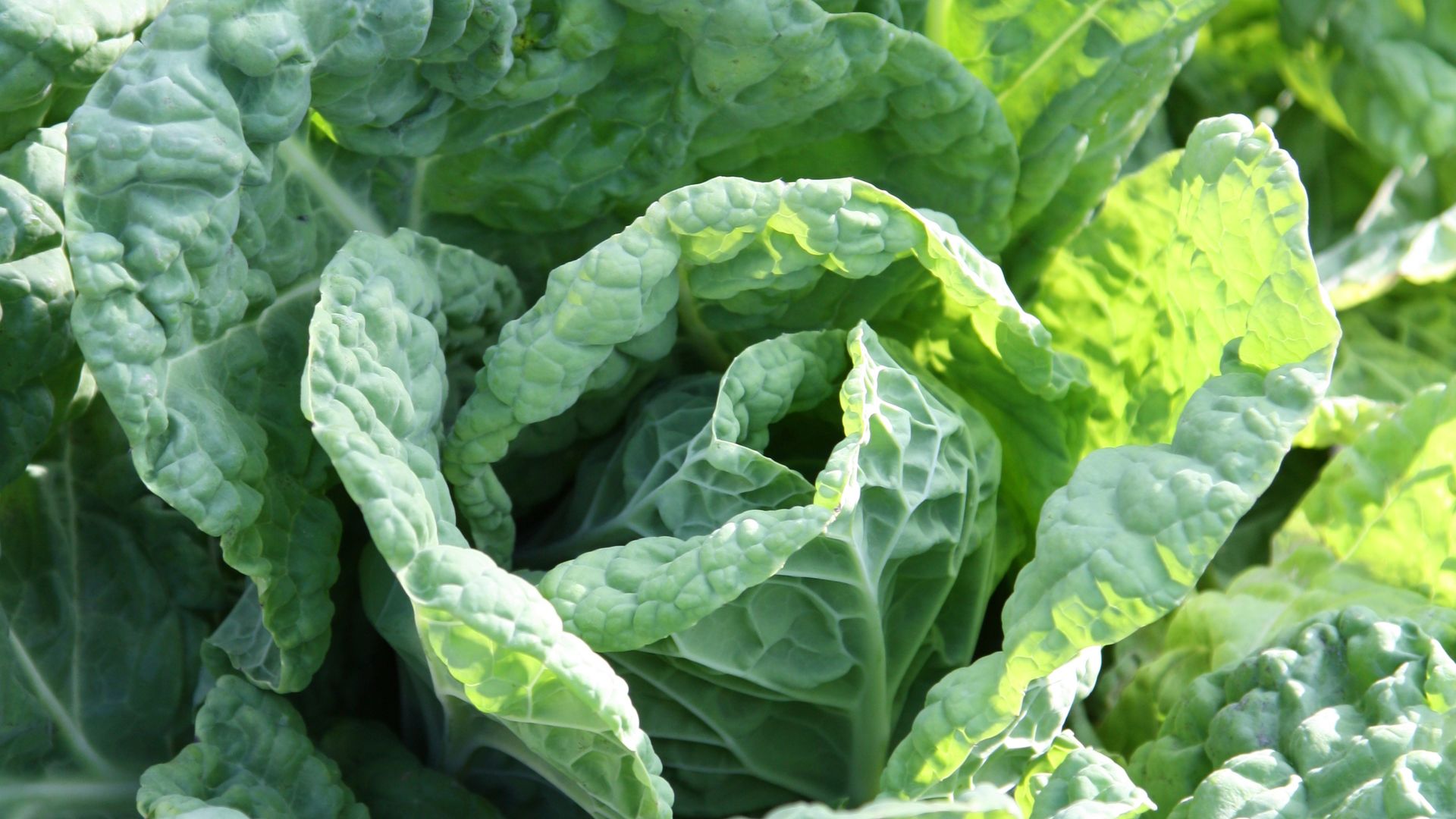 The Bergisch Butterkohl is an old cabbage variety that used to be found in every Bergisch home garden. Its leaves are reminiscent of savoy cabbage, but are looser and smoother. Only a few hobby gardeners and farmers still grow the tasty, elongated head cabbage with the green-golden leaves.

Precisely because of its tender leaves, which earned it the name butter cabbage, the cabbage head is not well suited for transport and storage. With the advent of supermarkets and frozen food, it has therefore fallen into oblivion. And even the seeds were no longer available from 2004 onwards, which attracted the Bergisch Gartenarche to the scene. Thanks to their research, the Bergische Initiative for the Preservation of Plant Diversity was able to locate old seeds and thus contribute to the preservation of butter cabbage in the Bergisch Land.

The mild cabbage can already be harvested leaf by leaf from early summer without having to cut off the entire cabbage head. Over a long period of time, you can spice up meals such as vegetable soups or entremets with the tasty vegetable. Buttered cabbage with bacon and a roux or cabbage stews with mead sausage are considered to be old bergisch.

Particularly well-known are "Pitter und Jupp", a savoy cabbage and carrot stew, or "Schloddderkappes" (sometimes also "Schlabberkappes"), a white cabbage and potato stew. Since the white cabbage leaves become sloppy ("twitch") and slobbery when cooked in the pot, people apparently came up with this figurative name. Why the other stew is translated as "Peter and Joseph" is still not known. It is possible that the dish was named after the patron saints of the workers in the quarries and mines of the Bergisch region. Incidentally, the working men liked to take a stew like this to warm up in the "Döppen" (handle) when they went on shift.

Turnip greens are also a traditional vegetable that is still enjoyed in the Bergisches Land in spring and autumn. The young leaves of the May or autumn turnip are prepared in a similar way to spinach or chard and served with potatoes, bacon bits and a light roux as a stew or with meat dishes and mashed potatoes. Turnip greens taste slightly sour and are reminiscent of sorrel.

Particularly in winter, the Bergisch families used to enjoy preparing dishes for each other with dried broad beans, home-made sauerkraut or homemade fitz or snap beans. For the preserved vegetables, the white cabbage and the diagonally cut ("fitzten") green beans were left to ferment lactic acid in a large stone pot. Sealed airtight, the vegetables fermented in the fermentation pot kept all winter long. The vegetables were alloyed with a bacon roux, folded into the mashed potatoes and served as a sub-dish.

Even today, sauerkraut stomping is a community event in the Bergisches Land. Local heritage associations such as the one in Reichshof-Eckenhagen and also the Slow Food Association take up the old tradition of "Kappes-Stampfen" with various events in autumn. At the Eckenhagen Farm Museum, the association "shaavt (hobels) and stomps" buckets of white cabbage, then offers the vegetable fermented at the "Kappesfest" in November both for on-site consumption and for sale. In October, the Slow Food Convivium Bergisches Land invites its members and the curious to a farm in the region to stock up on vitamin C for the winter.

In order to be able to continue to enjoy old vegetable varieties and thus preserve the biological diversity of the region, committed (hobby) gardeners, farmers and consumers are needed. Arguments such as "too little yield, too costly and too uneconomical" are causing more and more traditional and locally adapted plants to disappear from the market. According to the UN Food and Agriculture Organisation (FAO), about three quarters of all cultivated plants have been irreversibly lost in the past 100 years alone. With the Bergische Gartenarche, volunteers in the Bergisches Land are setting an example against oblivion. At the LVR Open-Air Museum in Lindlar, the Bergische Gartenarche  runs a show garden with old varieties and thus contributes to the preservation of old varieties and the culture of the Bergisches Bauerngarten. Within the framework of a plant exchange in spring and autumn, interested parties can exchange old seeds or purchase them for a donation. The five biological stations in the Nature Park Bergisches Land and NABU also support biodiversity in the region with activities throughout the year, including orchard days and apple juice presses.

A typical mountain cabbage dish is the stew "Pitter and Jupp". Depending on taste and availability, the quantities of ingredients can also be varied slightly. 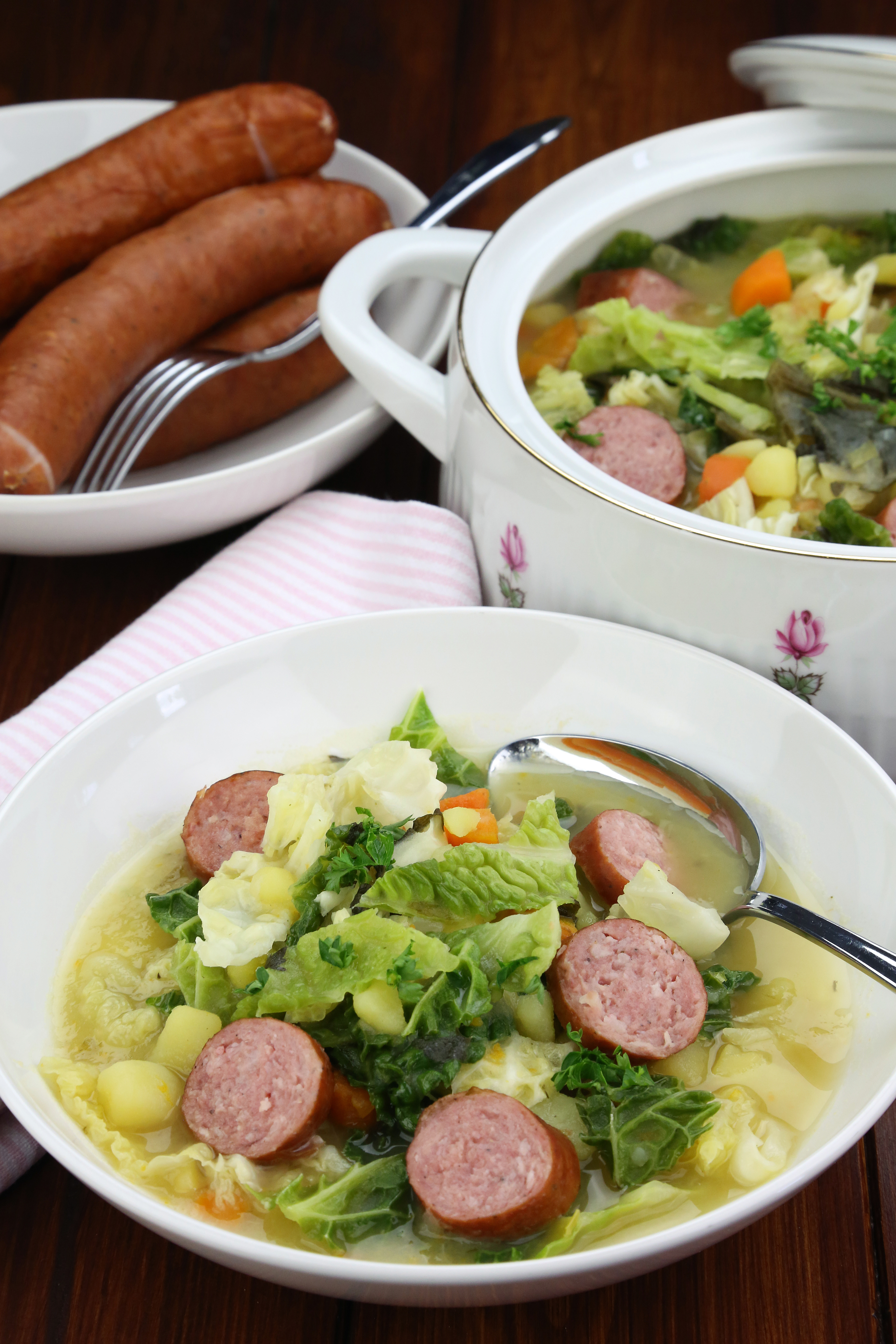 Clean, wash and chop the savoy cabbage and greens. Peel and dice the carrots, onions and potato. Bring the vegetables to the boil with the stock in a saucepan. Add more water as needed. Shortly before the end of the cooking time, mash the stew coarsely, slice the sausages and let them steep in the broth. Season to taste with the spices and sprinkle with finely chopped parsley.

Tip: Goes well with some bread.