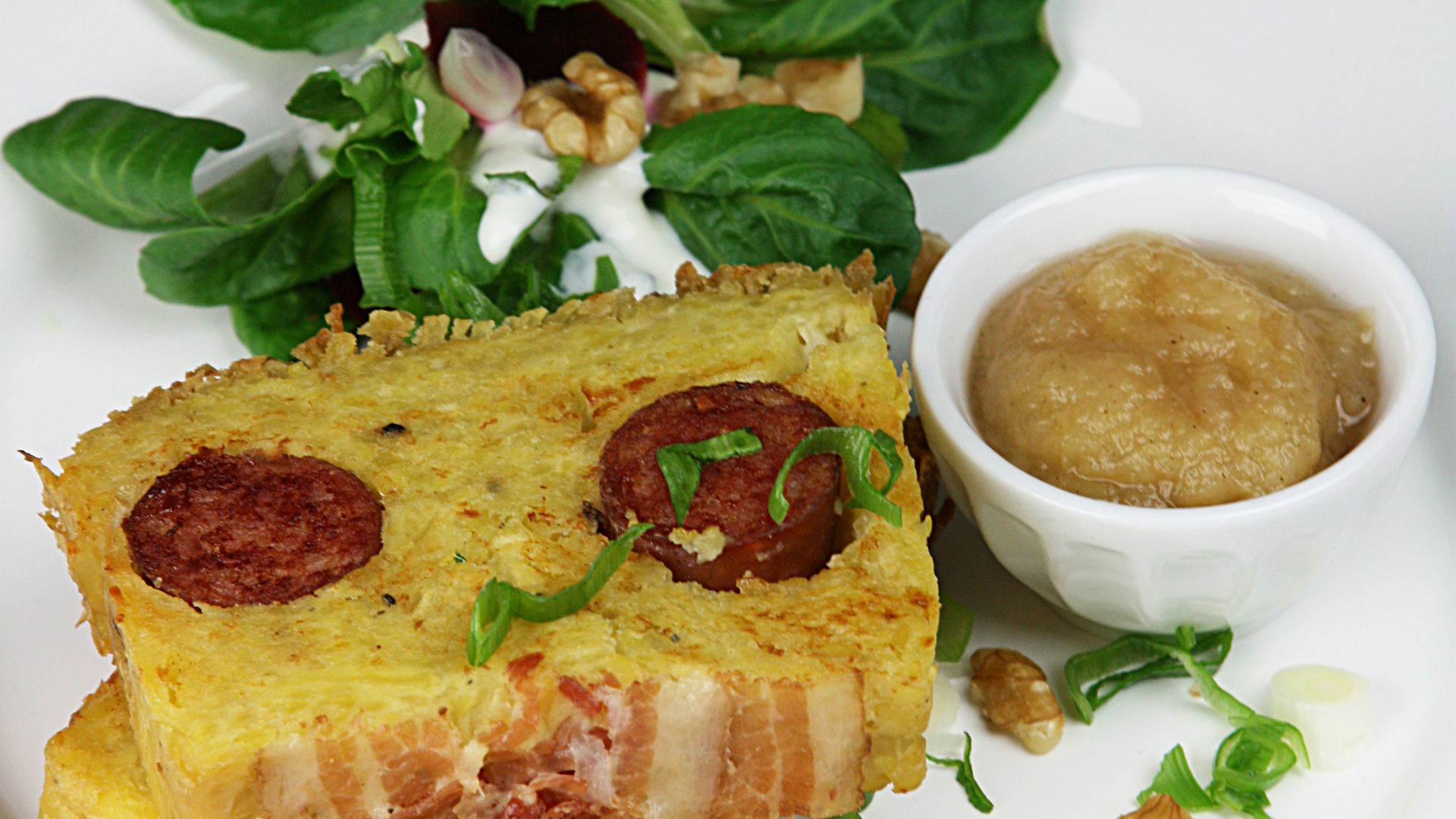 Bergische Potthucke is a hearty potato cake with mettwurst. Its name means: that which squats in the pot. The speciality is also known by the names Pfannenwatz, Knulls or Riefpucks throughout the Bergisches Land. The potato cake originally came from a poor people's kitchen.

In addition to cabbage, beans and peas, every household used to have home-grown potatoes as a staple food. Many families ate fried potatoes ("Pfannenscheiben") or small baked cakes made from mashed potatoes ("Erpelskooche") for breakfast to save on bread. "Erpelsfritz" (a mixture of salted and mashed potatoes with a little milk) was also a cheap spread. At lunchtime and in the evening, "Quellmänner met Stippzaus" (jacket potatoes with Stipp sauce) were also very popular. In the course of time, Bergisch cuisine developed many different ways of preparing potatoes, and many a family did not have goose on St. Martin's Day, but a Bergisch potato cake, the potthucke. The former "poor man's goose" is now a popular dish that can also be found on restaurant menus, for example at the member establishments of the Bergische Gastlichkeit association.

For the pot hock, first grate cooked and raw potatoes. The dough is bound with a little cream and egg and seasoned heartily. Fill the potato mixture with sausages into a loaf tin and bake in the oven until crispy. The cake is served in slices with apple sauce or a salad. The next day you fry the leftovers in a pan. Simple potato dishes such as "Leineweber" (pancakes with boiled potatoes), reminiscent of the simple dishes of textile workers, "Riefkooche", "Pille- oder Schnibbelskooche" (various potato cakes made from raw potatoes), potato biscuits and "Reibewaffeln" (potato cakes) also originated in the poor people's kitchen. For "Pillekoochen", in contrast to "Reibekuchen", the potatoes are grated on a special grater with a larger blade so that fine strips ("Piller") are obtained.

How the potato came to the Bergisch Land

Due to its hilly nature and its meadows and pastures, the Bergisches Land has always been a typical dairy and beef cattle region. Not only hilly but also barren soils made arable farming with demanding types of grain virtually impossible in some places. For this reason, the Oberbergische Land in particular was given the nickname "Haferspanien" early on. The poor region with its small family farms was often plagued by bad harvests and famines, which is why, according to local historian Olaf Link, the frugal potato was already being cultivated in 1731 by Solingen factory owner and landowner Peter Knecht in the Schlicken estate as a high-yield crop to combat hunger.

Good on field and in the kitchen

After initial prejudices among the population, the exotic tuberous plant from the Andes soon became established throughout the Bergisches Land. For a long time, the potato was the food par excellence, because it could be used in many ways. When the oat, rye and buckwheat harvests were low, it could even be used to stretch bread dough. 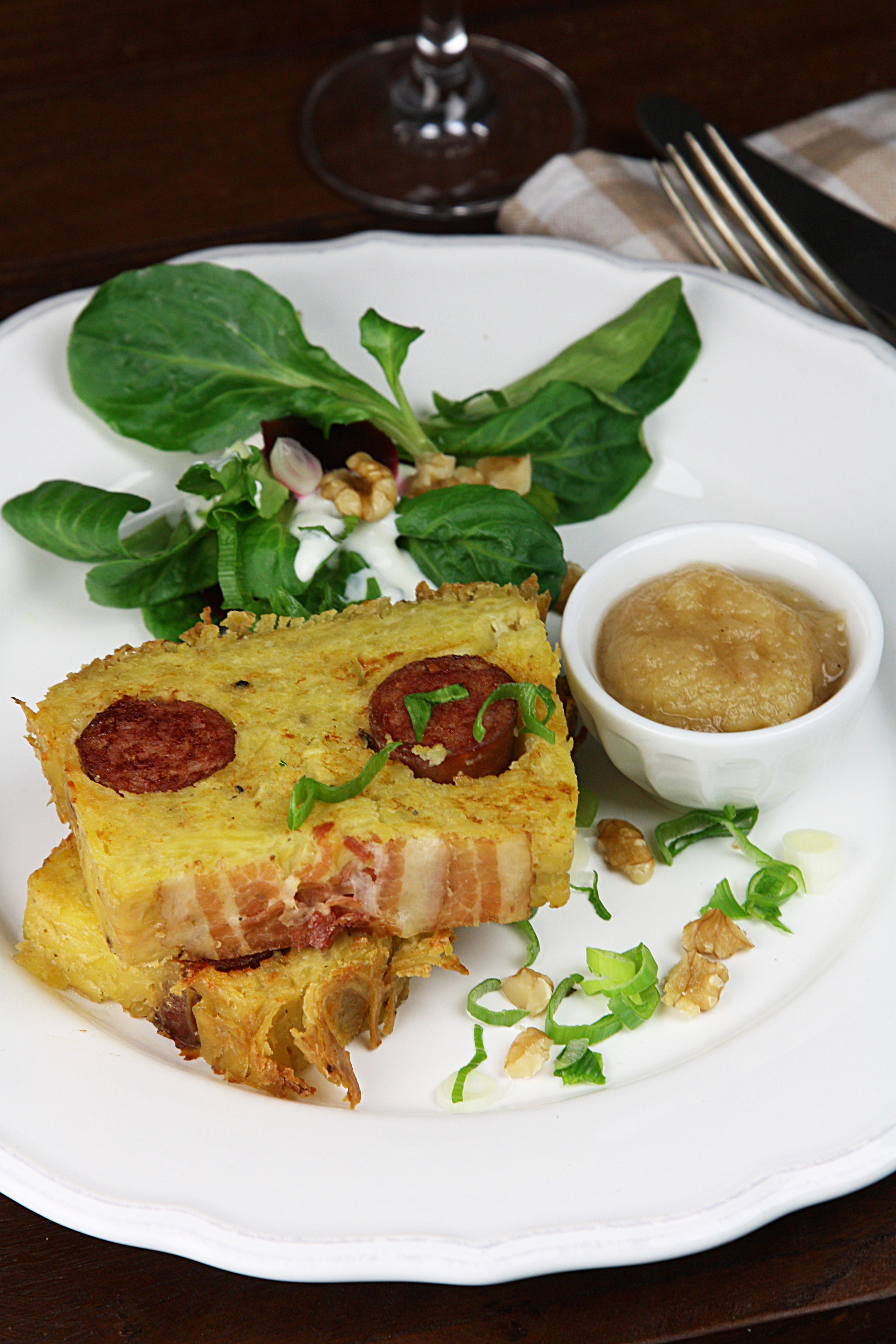 Potthucke once was a poor man's dish. The "little man's St. Martin's goose" also tastes delicious without sausages, even for vegetarians.

Ingredients for a large loaf tin

Boil 400 g of potatoes with skin, peel and press through a potato ricer. Roughly grate the rest of the potatoes. Add the eggs and cream to the chopped potatoes and mix everything well to form a dough. Season to taste with the spices.

Line a loaf tin with the slices of bacon and fill halfway with the potato mixture. Place the sausages on the pastry and pour the rest of the pastry on top.

Bake the potato cake in the oven at 160-180 degrees Celsius upper-lower heat for a good hour. Cut into slices and serve with apple sauce or a salad.

Tip: The next day, fry the remaining slices in the pan. For the vegetarian version, it is recommended to add two finely chopped, sautéed onions and/or some herbs to the batter.